The one where Gordon editorializes about the dreadful mental illness that is called 'love'.

Panel 1: Having observed that Mike isn't there, Liz asks Gordon where he went. When Gordo says that he went to see Martha, Liz said that this morning, she was history. This tells us that Mike is a cad who left his girlfriend in the dark for at least twelve hours because of a specious reason and an overweening need to lick his wounds.

Panel 2: Liz is baffled because Mike was the one apologizing despite the one being hurt. This tells us that Liz is an unreflective dimwit who never gets her facts straight. Gordon tells her that he's seen it over and over.

Panel 3: He tells her that when you fall in love, your brains disintegrate, you lose your ability to reason, you make a total clown of yourself because love is a weird, insidious illness.

This tells us that Lynn is into what immature people mistake for wisdom: cynicism. As Colbert said, it's a crutch for people who want to hide from a world that's hurt them.

Panel 4: He then sort of contradicts himself by wishing it would happen to him.

Summary: It doesn't really happen to him as such. What happens to him is that he's been assigned a wife and will be a loudspeaker for Lynn's belief that marriage and happiness are best when the confusing and disappointing horror that is love is not part of the equation.

As you know, I was trying to find an example of Elly fretting because she sees her mother staring back her in the mirror like that's a bad thing. I didn't have far to look because an upcoming arc:

has Connie remind Elly that most of what bothers her is</a> that when she looks in a mirror, she sees her mother's face looking back at her. If Connie were any sort of friend, she'd remind her that she said much the same thing when she turned thirty-five 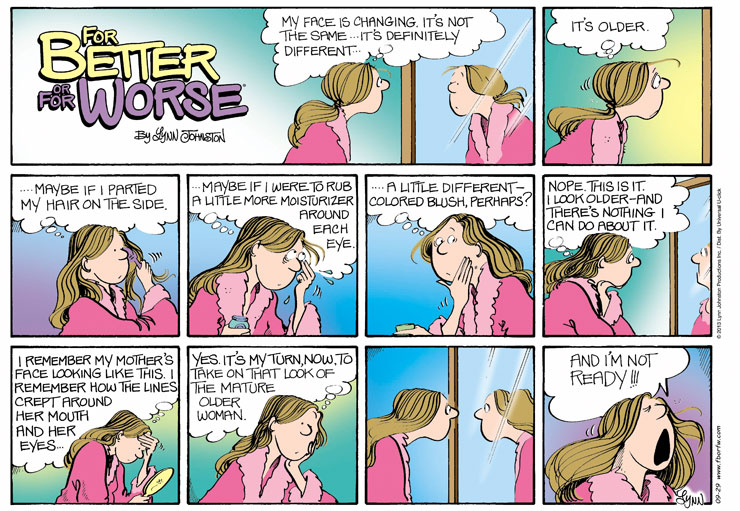 (and was making a ridiculous simp of herself yapping about being in the autumn of her life) and will say the same thing when she turns forty-five (and starts running her fat bazoo about how she didn't make a big deal of turning forty).

Instead, she's an enabler who feeds into Elly's bullcrap:

instead of being a smart guy doing the right thing and taking the problem away: 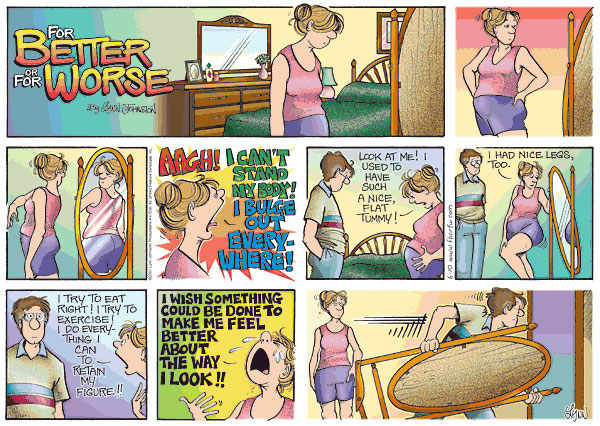 because he's not a dumb guy who doesn't admit that his daughter doesn't want to understand that she's beig paid a compliment: