The one where we learn the final lesson of the car wreck arc when Elly first acts like a histrionic idiot about how evil and dangerous motorcycles are.

Panel 1: We find Mike reading his bank statement and lamenting that all he's got is ninety-eight bucks saved up. He's never going to be able to afford whatever he's saving for. Elly asks him what that thing is.

Panel 2: He points out that he's almost fifteen. In a year, he'll be able to drive so wants to buy a motorcycle. Super-Terrified Elly yells "WHAT?" because her dread of devil noise machines blinds her to the fact that he ain't going to be able to afford a bus pass the way he spends money so will spend the early years of his driving career going "later" when asked to fill up the tank.

Panel 3: We set up an idiot woman probably blaming Howard Erk on motorbikes by her reacting how you'd expect her to: turning her back to him and yelling "NO! ABSOLUTELY NOT! THEY ARE TOO DANGEROUS!!"

Since he's stupid and doesn't know his mother and her belief that five seconds after getting on one, he'd be shot down by rednecks like Captain America and Billy in Easy Rider, he asks how they are dangerous.

Panel 4: She doubles down on being panicky and narrow-minded by telling him that to begin with, the only way he's getting one is over her dead body.

Summary: The arc itself is a celebration of how virtuous Elly is for worrying about all of the wrong things. We get to see that Thursday and Friday when John is an evil, conflict-causing, wife-sabotaging MAN for injecting reasoned arguments like "Calm down, Elly! He won't be able to afford the damned thing!" into a perfectly good panicky tantrum. Wednesday, I will teach you the myth of inherently safe vehicle. It is this lightning! It is this refusal to admit that the driver is what makes a vehicle safe! It is this fear and hatred of paying fucking attention and those who force awareness about busy mothers with nooooooo help and nooooooo time to themselves! 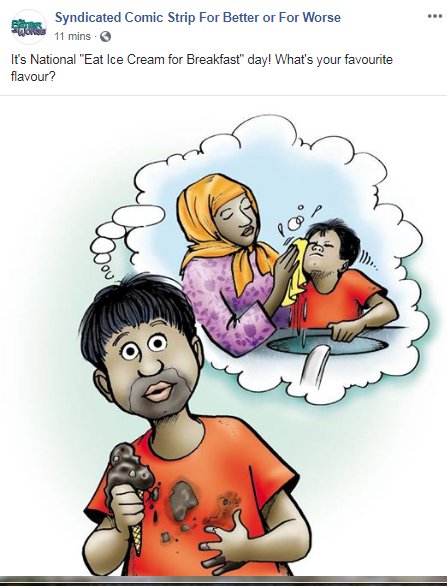 Let's try to unpack what the actual eff this image even is....
Collapse