Today’s Easter strip was duplicated during the new-run era, so I think it will be interesting to compare them. Here is today’s comic strip from 1990 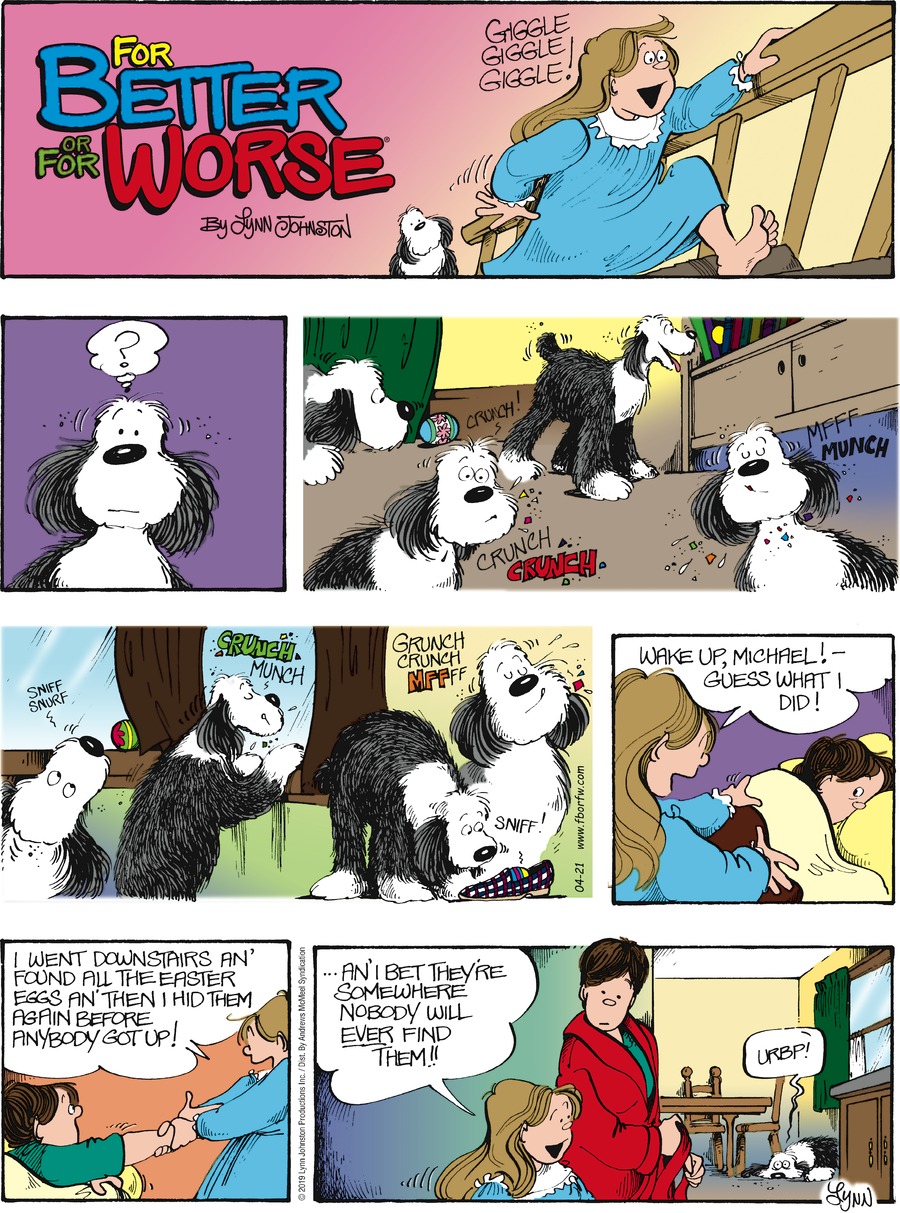 Here is the comic strip from Easter, 2009.
The new-run fixes a flaw. The premise of the 1990 strip is that Elizabeth found the Easter eggs that had been left overnight in preparation for an Easter Egg hunt and then hid them again so nobody would ever find them.  The joke is that Farley found all the eggs and put them in a place where no one would find them – his stomach.  The problem with the joke is that given this behaviour, Farley would have found all the eggs overnight.  The new-run corrects this problem by having the Pattersons leave the eggs out in preparation for the Easter Egg hunt, but admit a mistake in leaving the eggs out where Farley could get them while they were at church.  That fixes the overnight problem from 1990.

The new-run introduces new problems. The places where the eggs are hidden in 1990 seem like places where you would put eggs in an Easter Egg Hunt for a kid Elizabeth’s age.  They are not well-hidden, but hidden enough.  We have (1) behind a curtain, (2) in a bookshelf, (3) behind a window shade, (4) in a slipper.  The hiding places in the new-run are just plain strange.  We have (1) used as a stopper in a bathtub, (2) in a stuffed rabbit’s arms, (3) an egg cup on the table.  Those hiding places make no sense at all not only because they are not really hidden or they are strangely hidden (bathtub stopper?).

The new-run loses all restraint when it comes to sound effects. In 1990 Farley has one “sniff snurf” and then 3 crunches, 1 Mff munch, and 1 crunch munch.  In the new-run, he changes it up to have a Sniffff? Sniff snuff snerf” and all that was on the first one. The first eat is “Grunch.  Munch.  Crunch.  Smak.  Munch” and that was on the first one.  Every “sniff” has at least 3 “sniffs”.  Every “crunch” has at least 5 sound effects.

The new-run reminds us that the Patterson go to church on Easter, but the 1990 version has no sense of church to it.

The new-run blames the Easter Egg problem on the parents, while the 1990 version seems to blame Elizabeth.

The new-run has the malevolent bath duck in 2 panels, so kudos for that.

The new-run has long distance drawings in each panel, but the 1990 version has a lot of close-ups.

Both new-run and 1990 Farley say, “Urbp!”, but new-run Farley adds in a dark cloud and a “gurgle” sound effect.

Summary: Both comic strips are flawed, but the 1990 version is more visually interesting, does not feature as much of Lynn beating her readers over the head with too many sound effects, and seems like something more like an Easter Egg hunt.