John's more or less willingly indulging Liz's age almost-appropriate behaviour leads to Steve making a comment about how the cheese is slipping off of his cracker due to overwork.

Panel 1: We start things off with a smiling Elizabeth drawing chalk lines on the driveway. The time of year is established by having leaves just flying around at random.

Panel 2: Now that whatever she's been doing is completed, she says "There!!"

Panel 3: What she appears to be doing is devolving into a screenwriter's idea of what a six year old is; this is because she informs John that he can't simply walk down the driveway because it isn't one any more.

Panel 4: When she 'splains that he's in Jumping Land, he echoes the phrase in confusion.

Panel 5: She then explains that it's followed by Skipping, Twirling and Backward Lands; he mutters "Oh" because he understands that she's turned into a sitcom mutant again.

Panel 6: Since he finds that cute, he decides to play along by asking her of he has to go through all of these 'lands' to get to the road. She smiles as she says "All of them" because she doesn't realize that she's being very mildly patronized.

Panel 7: She laughs in childlike glee when he jumps his way through Jumping Land.

Panel 9: As he goes backwards through Backwards Land, we zoom out to see that Steve and Anne have been watching the whole thing; this is so Steve can tell Anne that he told her that Patterson has been working too hard.

Summary: Lynn seemed to get a lot of mileage with the "Rod/John is a great big kid really" theme. What she loses sight of is that someone who has a lot of little kid in him can sometimes be as cruel as a little kid too.

Not sure how/if it's possible to share, but on the Facebook page for FBorFW, there was a video posted with the following description:

Watch as Lynn brings adored FBorFW character "Anthony" to life! For the chance to receive an original drawing of your own, be sure to participate in our future contests.

Adored?!?!?! I don't think that word means what Lynn and her team think it does. A couple of notable things: Lynn is copying from a strip in one of her collections. Don't most cartoonist have model sheets for their characters, which they use instead of copying from earlier strips? Also Paul Lucas gets a credit for the background music. 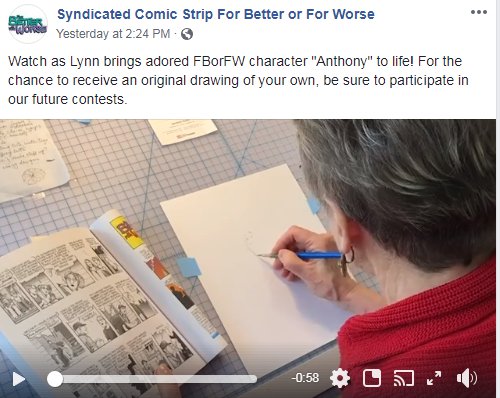 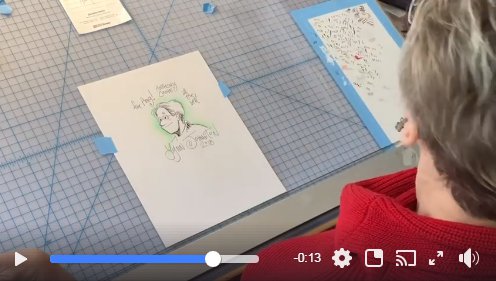 Ta-da! Lynn drew as much of Anthony as she had patience for (head and shoulders)
Collapse