It would seem that someone typed up some questions from the online fans for Lynn to read a month or so ago so as part of a new Q and Eh? deal. Here's the first batch and an unflattering self-portait:

to go with it. In the interests of clarity, I'll translate Lynn's words into what I think she means.

Lynn: I don’t miss Farley…I can bring him back to life with the stroke of a pen!

Translation: He's as real as I care to make him.

Éric Irizarry García: I was introduced to her work thanks to the specials crafted by Lacewood Productions in the early 90s when they aired here in Spain. So my question is simple: which of the—I believe six—did she find particularly enjoyable, as the author of the work on which it was based? Ah, Lacewood gave me so many treasured memories. I wonder where most of their works have gone..

Lee Williams Commented: As Co-Director of #6 with her…hope she says A Storm in April ?

Lynn: I think The Last Camping Trip was my favourite because it was based on an actual camping trip we took as a family when I was a child.

Lee! Great to hear from you. A Storm in April was a good one, thanks to the crew who worked on the show. You are certainly my favourite Co-Director!

[Ed.: you can get our Lacewood specials online here!]

The Christmas Angel was also a story that appeared in the comic strip and I think it worked best as a strip. What I regret is my insistence on having a tune in every show…I think the Christmas Angel song (Elizabeth dancing with the woman in the woods) could have been better.

I think Lacewood lives on under a different name. These companies tend to change hands or become absorbed into other companies. Lee…can you answer this one?

Translation: I can't be asked to actually remember where I got my ideas because doing all that boring research snarkertrolls want me to do would tell me that the Christmas Angel was not a story arc at all and it was actually A Storm In April that's based on the strip.

Shanna Smith: How do you overcome story block? Since it’s a full story that continues over the years, versus one-offs, were story ideas written way ahead or were their moments of writer’s/artist block that you had to overcome? How did you do it?

Lynn: Writer’s block affects everyone who writes for a living. If writing was easy then everyone would do it! Having faith in your own ability helps. Being well ahead of your deadlines makes the blank days work in your favour by allowing you to sit and contemplate the characters, what they are doing, how a “real” situation might pan out…A professional writer uses these times to research and reflect. Then, the ideas might come at 2:00am!

Translation: The only thing that I ever really cared about is meeting a deadline so it's okay that I turned in substandard and poorly-thought out material as long as it was delivered on time.

Ken Gabora: After so many years, would we be able to get a “What are they doing now?” Of the Patterson family? Like a limited run?

Lynn: I did a fast overview of the Pattersons’ future plans when I ended the strip. I confess, I haven’t looked at them to see what they are doing now. I think I just needed to let them go. What I enjoy most is looking at my old stuff. There were some good ideas flowing and at the time, I was so busy doing the work, running a home and playing “Lynn Johnston” that I didn’t really appreciate my own ideas! I look back now and wonder how I came up with some of them.

Translation: Because I decided in the early 2010s that the story was actually about getting Liz to the altar, I've told all the story I care to tell and I'd rather you changed the subject.

David Pearce: Are there any characters you wish you had concentrated on more outside of the Patterson family? What would you have done with these characters if you had had the time and space?

Lynn: I wish I’d had more time to develop the character “Candace”. I think she had real potential!

Translation: But then again, she might tend to make Elly look less than sympathetic and there's also the potential that the same awful people who don't care about diseased-ridden refugees might complain about how I'd somehow made the same sort of dog's breakfast of handling her mother's perverted jerk boyfriend that I supposedly did with the Howard Bunt arc so why bother?

The newest thing on the News Notes seems to be a contest directed at amateur artists in that people are asked to draw Farley.


How are your drawing skills? How much do you love Farley?

Challenge yourself by drawing Lynn’s beloved furry mutt, and we’ll show your artwork to Lynn. She’ll choose a winner, at the end of October, to receive a special FBorFW prize.

To enter: email your drawing to design@fborfw.com, by October 31st, with the subject line “Farley Art Contest”.


It seems to me a fairly simple thing. You start off with a flattened pear shape for the head, 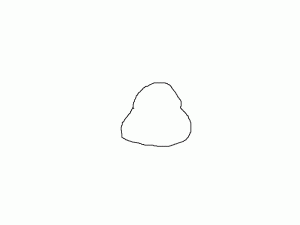 a big, black oval dead centre for his nose, 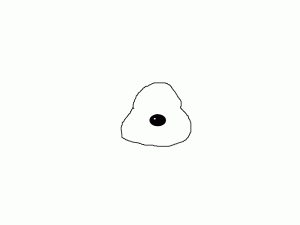 eyes on either side of the nose, grey ears that start where the pear-shape's neck flares out and a lot of dots around him to simulate the hair he shed all over the place. 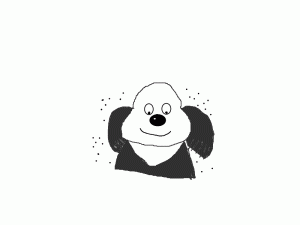 Michael and Martha argue over who kissed whom first, because, as we know, preteen boys are worried about people thinking they are sluts.

Panel 1:   The first two panels show that Lynn Johnston was struggling with dialogue placement.  You can see a straight line headed out of Elly’s head to Elizabeth’s speech balloon, which is a giveaway; but the biggest giveaway is that Elly is unnecessarily short.  Lynn Johnston has no problem shrinking her characters to make the dialogue fit, so the line tells us that she originally planned for Elly to say more in a balloon matching that unexplained line.   As to why Lynn left that line in, the answer is our usual, “Lynn Johnston don't use no stinking erasers.”

So we can only imagine what the dialogue might have been.  We have:

Elly: Elizabeth – What are you doing?

Elizabeth:  Shhh…Michael’s on the phone.

Elly: I need to get to the kitchen to cook your dinner that you will not appreciate even though it is where we have the only phone in the house and I need to say this to explain where Michael is when he is on the phone.

Elly: How do you pronounce the "ch" in the word, “mischevious”?

Elly: Your father found out that he has high cholesterol and it’s all because you begged him for a hug.  What did I tell you about begging, Elizabeth?

Panel 2: Elly delivers her lecture, “It’s rude to listen in to other people’s conversations, young lady!” and Lizzie has been shrunk in deference possibly to Elly’s lecture, but more likely because Lynn planned for there to be a dialogue balloon for her reaction, which somehow did not make it in the comic strip.  Possible things Lizzie could have said:

Elizabeth: Yah!  And nuts to you, buster!

Elizabeth: But he’s talking to a girl and he’s never done that before.

Elizabeth: How do you get your arm to attach to your waist like that?

Panel 3: He we are in Retcon City.  Apparently someone told Lynn Johnston that preteen boys could care less if preteen girls found out that they have been kissed by a girl, so Lynn feels the need to add a little extra caveat when Michael says, “Wait a minute, you went around telling everyone I kissed you.  You kissed me, remember?”  So Michael is angry at Martha because:

1.   She didn’t tell the story correctly and as a future journalist, he expects truth in reporting.
2.   Michael has issues with aggressive girls (It’s the old Madonna–whore complex).
3.   As a typical preteen Michael enjoys anger and righteous indignation more than common sense.
4.   Michael is good at holding a grudge, not unlike a certain cartoonist I know.
5.   Michael is an idiot.

Panel 4: Elly demonstrates just why it is that her lectures to Lizzie about rudeness will never sink in for Lizzie.

Summary: As we will find out, Martha is calling to invite Michael to hang out at her house, which seems like a pretty friendly gesture.  Michael brings up the kissing gossip issue again in response and picks a fight with a girl who is extending the olive branch of peace.  He was so eager to pick up the phone because it was a girl yesterday.  Given this response, it makes me wonder if he was expecting a call from a different girl.