The third from Sarah L. Hunter.  As usual, I will quote and then comment after the cut: 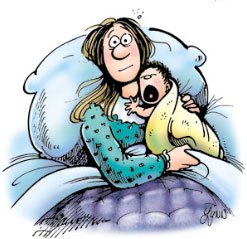 Is there anything more nerve-wracking than coming home from the hospital with your brand new crying poop machine? This marvelous little baby, with her tiny coos and little pink hands, who falls asleep on your chest as you awkwardly hold her (because god help you if you move and wake her up!) Every book you’ve read on babies tells you how important sleep is, for them and for you. As she quietly snoozes, you smile softly and slide into bed, exhausted, ready to sleep. Yet one cough, one tiny little breath from her, and you’re wide awake, heart thumping, peering through the slats of the crib at your new baby.

My comment: Unlike Elly and John with April, it sounds like Sarah put the new baby in the crib in her own room just after the baby was born.  Right away, she marks herself as a better mother than Elly.  I agree with her sentiment.  I remember when my kids were newborn, we did watch them closely.  My son, who had been in the ICU for 4 days after his birth, was stared at a lot when we got him home.

When it came to sleeping, my youngest was terrible. The first night we brought him home, I could not believe the sounds this kid was making. He was snorting, snuffling, coughing, and burping like a trucker with indigestion. There wasn’t a single two minute stretch where he was quiet. Of course, since his crib was twelve inches from our bed, we had front row seats to this symphony. As the days passed, he seemed to get louder. Yes, the doctor reassured us, he was perfectly healthy.

My comment: From the WebMD:  "High-pitched, squeaky sound: Called stridor or laryngomalacia, this is a sound very young babies make when breathing in. It is worse when a child is lying on their back. It is caused by excess tissue around the larynx and is typically harmless. It typically passes by the time a child reaches age 2."

Yes, his lungs sounded fine. Yes, he recommended industrial strength earplugs. Sleeping at night was impossible, and I had to convince myself that a forty-five minute nap at lunchtime was enough to keep me healthy. My husband ended up taking the “late shift”; he would rock our son to sleep from 9 pm to midnight, while I collapsed in bed. Then, ever so carefully, he would transfer our son into his crib, then sneak into bed for some shut-eye. This system worked for a while, until I looked at my husband one morning and realized that his under-eye bags were enormous and his skin was gray…so another system had to be found!

My comment: From the WebMD:  "Pallor, or pale skin, and grayish or blue skin are a result of a lack of oxygenated blood. Your blood carries oxygen around your body, and when this is disrupted, you see a discoloration. The disruption may be to the flow of blood itself, which produces paleness or a gray tint to skin tone."  Sorry, Sarah, but sleep deprivation does not cause this problem. Results show that the faces of sleep-deprived individuals were perceived as having more hanging eyelids, redder eyes, more swollen eyes and darker circles under the eyes.  The under-eye bags make sense.  I notice that Sarah says “another system had to be found,” but she also does not say what that other system was or if it was ever found.

Our son eventually figured out that it was really fun to lie on his back, raise both legs in the air, then karate slam them down onto the mattress so hard that the crib shook. We were desperately trying to sleep, and he was practicing his gymnastics routine. It was during one of his late night kick-boxing sessions that I tiredly thought: “this will never get better. This is what the rest of our lives will be like.”

My comment: If I were giving advice to Sarah as a fellow parent, I would talk to her about mattress pads that reduce the crib vibration if your kid does that.  My son was a kicker too.

Finally, FINALLY, he was old enough to sleep in his own room, and we gleefully moved the crib. This was it! At long last, sleep! Nope. Not even close. This time, his thumps and snorts echoed out through the baby monitor, snapping me awake with a jolt. Despite my husband’s advice to “just sleep through it”, I would spend hours awake, worriedly trying to force myself back to oblivion. Out of desperation, I would sometimes leave the monitor in the bedroom and sleep on the couch. This didn’t really do much to help, or ease my anxiety, and often left me with a sore back as well.

My comment: According to the American Academy of Pediatrics (AAP), "the best place for a baby to sleep is in his parents' bedroom. He should sleep in his own crib or bassinet (or in a co-sleeper safely attached to the bed), but shouldn't be in his own room until he is at least 6 months."  Frankly, the husband’s advice is pretty sound.  With my son, we quickly learned when he was making the sounds that were going to lead to crying and the sounds he made just from breathing.  I learned to sleep through the breathing noises.

Gradually…so slowly it was hard to notice, my son’s sleeping habits improved. He got quieter, more consistent, and more peaceful. It took months, and many endless nights, but it did get better. I started getting more sleep too, with a three hour uninterrupted stretch being considered a victory!

My comment: Sarah is contradicting herself.  Remember that her husband took the 9 pm to midnight shift with the baby, which means Sarah already had her three-hour uninterrupted stretch, plus the baby’s nap times during the day.

Those awful nights seem so far away now. Today, my son sleeps soundly, and the only thing waking me up during the night is the dog (does he really have to violently flaps his ears back and forth at 3 am?)

My comment: A dog violently flapping his ears is often the sign the dog has an ear infection.  Perhaps a vet visit is in order.

I remember the days before we had kids (centuries ago) when my husband and I would sleep past noon on Saturdays. Past noon! I can’t believe it. Even if I wanted to, I could never sleep that late anymore – but I’d sure like to try.

My comment: The husband probably remembers the activities on Friday night that led to sleeping past noon on Saturdays.