We end the week Elly wanting Mike to learn the tidiness habit while she's still alive to play the "See, it DIDN'T kill you" card.

Panel 1: Shortly after John worms his way out of the mess he made, Elly comes into Mike's room to remind him that he was told an hour ago to stop playing and clean his room. Mike says that he's going to.

Panel 2: Since he hasn't put his toys away right that second, she tells him to clean up and says that he's going to.

Panel 3: When Elly tells him to do so a third time, Mike promises that he will clean up his room.

Panel 4: Elly walks away and says "I know. I just want it done in my lifetime."

Summary: If we do get notes, they'll probably be a rehash of the "Aaron clearly hated me because he only started picking up after himself when he left home" thing she likes to do. Of course, we could also add in a self-pitying rant about how forty years after she's passed away, it might occur to her son that he treated her badly and should be ashamed of himself for playing and wanting to destroy her freedom of expression or what-the-boxcar-ever. 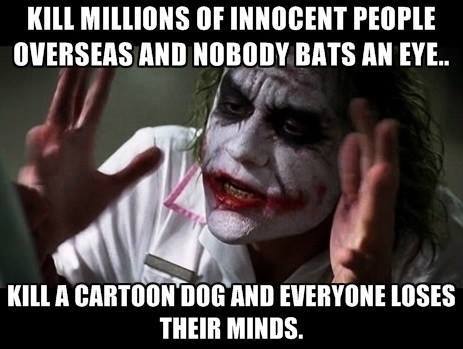 They're actually talking about Brian from "Family Guy" but it totally applies to FOOB as well, doesn't it?
Collapse