For some reason, today’s comic strip seems to be like the exact opposite of this comic strip from Friday, May 19, 2006, where John appeared as a demented pervert driving around with two underage boys.

Panel 1: Mike, Gordon and Lawrence, apparently have spent their time pulling each other legs because it looks like someone stretched their legs out a lot longer than usual.  Not only do they tower over John Patterson, but they are close to the height of the garage.   If the garage door is 7 feet, then the boys are about 9 -10 feet tall.  That’s not the only perspective problem, because the view of the house is straight on, but the driveway and the car are at an angle to the house.  Michael apparently is begging a ride so they can go somewhere.  What that destination is, we will never know.  What Lynn Johnston was drinking when she drew this one, we will also never know.  I also note this car does not look the same as when we last saw it and there was only one front headlight per side. 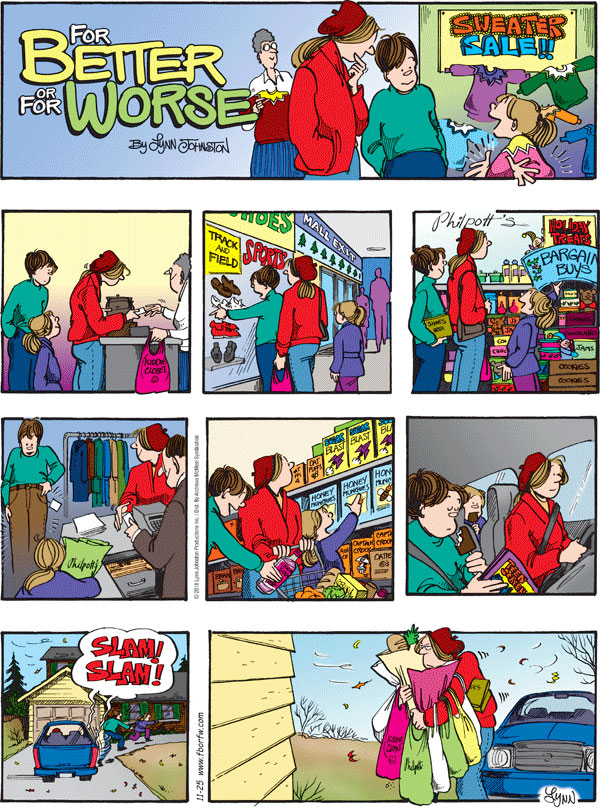 This is also an example of what the driveway looks like when it is straight.

Panel 2:  Michael waves the boys in as Gordon reaches for his …. crotch?  Gordon also shrinks so he is now significantly shorter than Lawrence.  John looks up to the sky as if to say, “Tut. Tut.  It looks like rain.”

Panel 3:  Michael picks up a sports magazine from somewhere and reads it while both he and John are the only ones wearing seatbelts.  In the original it was the same way, so the belts were not drawn in.  Meanwhile in the back multi-talented Gordon not only reaches his wrist around the seat to touch Michael on the shoulder, but he leans over and goes full muppet mouth looking at something out the window.  Lawrence goes muppet mouth too.

Panel 4:  Windows are lowered and the cat calls begin.   It has not been that long since Michael and his friends were cat calling women on the beach, so Lynn Johnston is going to spend a solid 4 panels in a row developing this idea as John grows increasingly irritated with the boys and their bad behavior.  Will John say anything?   Will the joke make sense when we finally see it?   I believe the answer to both of those questions is, “No.”

Panel 5:  As Michael whistles and sticks his head out the window, his hair mysteriously blows to the left, which is what would be happening if John was backing up at a high velocity.  Sorry, Lynn Johnston but when the car is moving forward, the hair goes in the other direction.

Panel 6: Gordon declares he is in love.  Michael sticks his tongue out and says, “Hooo boy!”  Meanwhile, a distance away, the real Hoo Boy yells, “Hey!  That’s my catchphrase.”

Panel 7:  Lawrence, who has previously been silent lets out a “Screech” and this makes John’s cheeks flush and causes his right arm to extend way in front of him as Lynn demonstrates her inability to draw perspective once again.

Panel 8: The punchline is that John is startled to see the boys have been making these noises about a bearded guy with a heart tattoo on his arm riding what appears to be a stripped down motorcycle.  The front of it is too low and the exhaust pipes are going out and not back, but for Lynn Johnston, this is a pretty fair rendition of a motorcycle.  The dual exhaust style tells us this is probably a Harley-Davidson but the style is not an exact match for any real motorcycle that I can find.  What I know for sure is that it does not look even remotely close to any Japanese or European motorcycle of the 1980s or 90s.

Summary:  Does the joke make any sense?  It does only if you can accept the idea that boys would get so excited about that motorcycle or the guy riding it to make cat calls about it.  Do boys make cat calls at motorcycles?  I do not know of any boys that do that.  The motorcycle rider might take it the wrong way and nobody wants that.

There is a style of humor that sets up an expectation and then reveals a mismatch between expectation and reality.  This can lead to humor, however for such a joke to be very funny, the reader has to agree with the revealed truth.  Otherwise, they may find it baffling.  In my opinion, that is what we have here.  Baffling.